In the first post of this series, we discussed the history of electronic warfare with an emphasis on the back-and-forth competition to develop systems that grant the owner control over the electromagnetic spectrum. When one country develops a new radar system, its adversary starts working on a jammer. In order to mitigate the effects of the jammer, the radar developer then must design a system that protects the radar from those effects.

This invisible battle over control of the electromagnetic spectrum is critical to success on the battlefield and is the topic of the subsequent posts. However, understanding the technology to jam and deceive radar requires an understanding of the radar systems.

We're all familiar with the applications of radar—that yellow warning light on your mirror telling you someone is in your blind spot, police radar monitoring your speed, images on the news showing the path of a storm. However, for the purpose of understanding electronic warfare, we'll look at the types of radar in three main groups.

Search radars scan over long ranges and wide angles to locate targets. For example, early warning systems can detect distant threats to provide adequate time for a response. These types of radar systems often operate at lower frequencies since range is prioritized over resolution. Because range is so critical, these systems are sometimes installed on-board aircraft to increase the line-of-sight to the horizon.

Tracking radar systems accurately measure a small number of targets—often just one. By operating at a higher frequency, the resolution is increased, providing improved accuracy. Additionally, instead of scanning a large area, they focus on a much smaller region in order to continuously monitor their target. Fire-control radars employ this type of system. 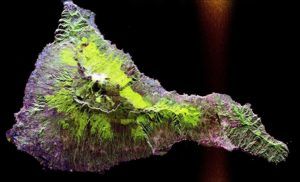 Now that we've broken down types of radar by their application, we'll move on to describing the details behind their operation.

At its core, radar technology is simple. The transmitter sends a signal towards the target. Some energy from this pulse reflects off of the target and is received by the radar system. Since the radar signals propagate at the speed of light, measuring the elapsed time between sending the original signal and receiving the reflection allows for a calculation of the distance. By confining the radar signal to a narrow beam, the location of the source of the reflection is known.

Doppler Radar The approach above provides the distance to the target and the angle of the target relative to the radar system. However, what if we also need to understand how the target is moving? To do this, we use Doppler radar.

If you aren’t familiar with the Doppler effect, it explains why the pitch of a siren appears to change right as the ambulance drives past. In terms of radar, the frequency of the reflected wave is modified as a function of the reflector’s velocity. In practice, the velocity of the target is determined by analyzing the phase shift in the received radar signal. Measuring this phase shift requires the transmitted radar pulses to have the same phase offset. While creating coherent pulses is a challenge, it enables a much more capable radar system.

In addition to determining the target’s velocity, Doppler radar can filter out reflections from objects with low velocities. In the case of an airborne Doppler radar, this technique is able to discard many of the reflections from the ground. Referred to as "ground clutter rejection", this technique increases the radar’s ability to easily identify other airborne targets—especially those flying low near the source of the unwanted ground reflections.

Next, we'll describe two key performance metrics of a radar system—range and resolution—and discuss some common techniques to improve them.

Range To understand how to optimize the range of a radar system, we first need to review some of the factors that determine the range. Depending on the gain of the antenna, a percentage of the transmitted power is incident on the target, and depending on the target’s radar cross section, some of that power is reflected back to the radar antenna. As the range is increased, less and less power returns to the radar receiver. When the received power of the signal is close to the noise floor, the range of the radar has been exceeded.

Obviously, increasing the transmitted power also increases the received power. One way to accomplish this is through the use of a GaN-based power amplifier. This high-power technology supports increased output power in a small form factor. A less obvious approach is to integrate multiple pulses. Since the noise is roughly random in nature, averaging multiple measurements improves the signal-to-noise ratio and therefore increases the radar’s range.

Resolution As described above, tracking radars need to accurately locate the target with high resolution. Operating at a high frequency is one way to improve the resolution of the radar. Another approach is shaping the waveform, using techniques such as pulse compression. Linear frequency modulation, commonly referred to as "chip", is one type of pulse compression. While the details are beyond the scope of this article, they result in the radar receiving narrower pulses, which improve the resolution of the radar.

The world is changing and so are we
Mercury has evolved as a technology leader. And just as we have evolved, so too has our brand. Human, confident and bold, our new brand voice is symbolic of Mercury today – a technology company dedicated to innovation, a culture that is people-centered and a vision to make the world a safer and more secure place for all.
Monty Python and the Search for the TAC-3290
What can Mercury Systems possibly have in common with a classic Monty Python movie? Meet the “holy grail” of signal intelligence solutions—Mercury’s new TAC-3290 microwave tuner. Small enough to fit in a backpack, this ultra-wideband microwave tuner brings an unprecedented level of flexibility and high-performance microwave frequency conversion to users in space-constrained environments. This ready-for-anything tuner brings broadband quality RF signal processing to edge applications and plays a starring role in Mercury’s family of low-SWaP, multiple-bandwidth downconverter/tuners.
Follow-Up Q&As : Open Architectures and Enduring Competitiveness
Back by popular demand, Mercury CTO Dr. Bill Conley, and Dr. Ian Dunn, Chief Scientist and VP, Advanced Technologies, are once again teaming up to answer additional questions raised by customers, suppliers and partners who attended their informative “Open Architectures and Enduring Competitiveness” webinar held last month. Learn more about how the source of research and development has shifted from the federal sector into the private sector over the last decade and the important role of open architecture to the defense ecosystem.
Mercury and Intel are Making Mobile Platforms Smarter with Artificial Intelligence for Complex Missions
Mercury and Intel are collaborating to scale a common enterprise data center architecture across fog and edge layers. Learn more about how we are enabling big data and AI-powered processing resources for deployment to complex missions and tasks.
Three Ways Mercury and SigmaX are Securing Machine Learning at the Edge with NVIDIA EGX
By utilizing the NVIDIA EGX edge AI platform for edge computing, coupled with open software stacks, machine learning (ML) data can be deployed and accelerated to retain operational advantage. Learn how Mercury and SigmaX are securing ML for multi-domain operations.