Key Takeaways from the 55th Annual AOC Symposium and Conference

Sometimes it’s hard to believe how quickly technology progresses. It’s only been about a decade since Steve Jobs announced the first iPhone. And today, between checking email, navigating to a new restaurant, sharing photos with family and turning the lights on or off in my kid’s room, it’s hard to image life without a smart phone.

Let’s go back in time to the year 1992—about 15 years before the iPhone and the beginning of the Joint Strike Fighter program. While the earliest prototypes flew in late 2000, it wasn’t until 2006 that the F-35 had its first test flight. Then, in 2011, almost two decades after the program began, the first production aircraft rolled off the assembly line. While this was a very long development time when compared to smart phones, no one would trust a smart phone with their life. That said, the digital revolution of the last decade is finding its way to the electronic warfare (EW) industry, and it's forcing us to change how we deploy EW systems.

This new and continually changing reality was on everyone’s mind at the recent AOC Symposium and Conference held in Washington, DC. The symposium theme, "Winning the Electromagnetic Spectrum Domain: A Culture and Mind Shift", captured the sentiment clearly.

Fifty years ago, the high cost and extended development time of RF systems limited operation in the electromagnetic spectrum. You could choose your frequency with the confidence that interference from others operating at the same frequency would be minimal, or at the least, delayed. However, the times have changed. Using readily available digital technology, our adversaries are able to quickly deploy advanced electronic warfare technology that has the potential to massively change how battles are fought.

While the symposium discussed many topics, there are two key takeaways I believe are worth focused attention. The first takeaway is the challenge of operating in the congested and contested electromagnetic spectrum. Not only can the adversary employ jamming technology, but our own use of the spectrum limits the available frequency bands. Additionally, with the availability of high-performance commercial components and the ability to digitally implement EW techniques, the adversary can quickly develop an advanced electronic attack capability. As General Paul Selva said in his keynote address, in the digital space, fast followers can quickly jump right past you.

For a more detailed discussion of these two topics, take a look at my guest blog post on the Military Embedded Systems website.

As the show wrapped up, we had the opportunity to see how various suppliers were addressing these challenges. Here at Mercury, we leverage the best commercial technology to develop solutions that are reliable and module. Using open system architectures, products can be developed at a rapid pace, easily installed into our customer's systems and quickly updated as new technology becomes available.

An example is the RFM3101 microwave transceiver, which we exhibited at the conference and earned us a Best in Show Award. This ultra-wideband module incorporates OpenVPX™ to enable easy integration into the customer’s system and OpenRFM™ to support rapid customization. By incorporating a modular design approach, the transceiver can quickly be upgraded to take advantage of new technology. 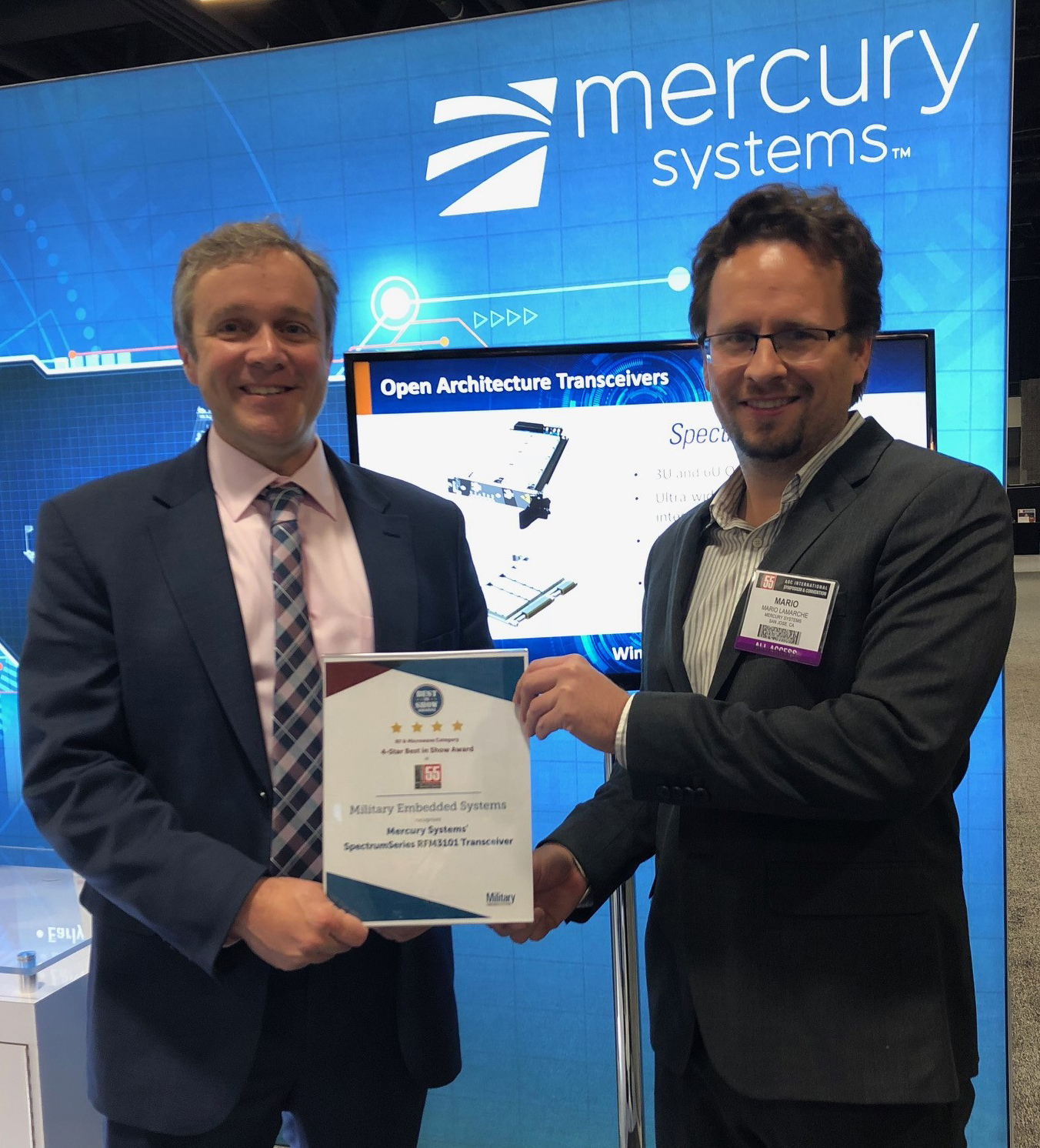